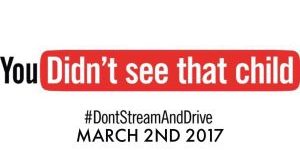 Have you signed up for the Don’t Stream and Drive Day Thunderclap yet?

Tuesday 3 April has been designated Don’t Stream and Drive Day in the UK and Asprey Harris are proud to be recognised sponsors of the day, believing that this campaign addresses a very serious road safety issue. Streaming and driving at the wheel can cause significant distraction leading to serious injury or fatal accidents.

In an ideal world there would be no need for a #DontStreamAndDrive day. However, despite the campaigning, the practice continues to grow as more platforms open themselves up to live video capability. A short search on any day will quickly find a driver engaging in this dangerous behaviour. The need for the campaign is as vital now as it was when it started in 2016.

Led by a serving police officer, the campaign is being widely advertised on social media and uses the hashtag  #DontStreamandDrive. It will be publicised by a Thunderclap across social media at 4pm on the day through the Twitter, Tumblr and Facebook accounts of those who are taking part; with just five days to go the campaign has more than 500 supporters with a social reach in excess of 8,070,000.

Supporters include the majority of police forces in the UK plus companies throughout the country who believe that streaming and driving is a problem that needs to be resolved.

Be prepared to receive a Don’t Stream and Drive Thunderclap on Tuesday 3 April or better still, join the campaign and send the message to all your social media followers.

Learn more about the campaign

Take part in the Thunderclap