Fancy a bit of DIY this Easter? 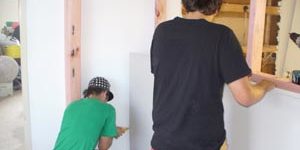 As the Easter break approaches many people’s minds will turn to DIY, the holiday weekend being the busiest time of the year for the UK’s largest home improvement warehouses.

But is all this DIY as successful as we expect it to be or does it turn to disaster?

A recent survey of new house buyers by Aviva shows that four in ten home owners suffer a DIY disaster in their first year of ownership and more than half end up calling in the professionals to put it right.

The survey discovered that the top ten disasters include one or more of the following:

The study of around 1,000 home owners revealed that on average they spent more than £10,000 on home improvements in their first year and up to 90% said that they tried to save money by doing some of the work themselves. Yet more than half admitted that they had to call in a professional to correct and finish the work after disaster struck.

Adam Beckett, propositions director for Aviva says: “When it comes to decorating and renovating most of us have a ‘can do’ attitude – or we’re at least willing to give things a go! Budgets are often tight after a house move too, so DIY can be a great way of saving cash. However, the reality is that some jobs are trickier than they look and can actually ending up costing more if mistakes need to be put right.

“It’s always worth weighing up whether the DIY route is the best way to go, particularly when it comes to plumbing or electrical jobs which could be extremely dangerous if things go wrong. Prevention is better than the cure when it comes to DIY disasters, but when mistakes do happen, it’s worth getting in touch with your home insurance provider – particularly if you have accidental damage cover – as they may well be able to help you get back to that ‘house beautiful’.”

More details of the survey can be found here