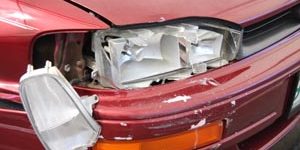 With the recent conviction of a ‘cash for crash’ gang The Insurance Fraud Bureau (IFB) has successfully prosecuted 500 cases for fraudulent insurance claims. Leading the insurance industry’s collective fight against insurance fraud, the IFB obtained a conviction of a ‘crash for cash’ gang who deliberately caused a crash in Warwickshire.

Four individuals were convicted of Fraud by False Representation for their part in the scam. During the trial the court heard how the group took to public roads with the sole intention of deliberately crashing into innocent and unsuspecting members of the public, putting people at a very real risk of serious injury. The gang then submitted multiple claims to insurance companies for fake injuries, vehicle damage and solicitor costs.

‘Crash for cash’ gangs are calculated in their activities and plan to maximise the amount of money they can fraudulently claim. This group used scripts to authenticate their fraud, detailing the scenarios surrounding each crash to ensure that nothing could put their ‘claims’ in jeopardy. The scripts had undoubtedly been created to guarantee that no mistakes were made when reporting the crashes to insurers. A piece of paper, found in the possession of one of the gang at the time of his arrest, included the specifics of accidents with drivers and vehicles details. The notes also included basic drawings of the crashes as a prompt of their colluded story, along with a noted reminder of the fake back and neck injuries they were attempting to claim for.

Ben Fletcher, Director of the IFB, said: “All too often we see innocent members of the public being targeted by crash for cash gangs like these. The public need to be extra vigilant when driving on the roads and report any suspicions they have to the Cheatline. This gang was sophisticated, using scripts to ensure their fakes claims looked valid to insurers.

“Fraudsters are fuelled by greed and have little regard for the impact they have on others. Not only are they putting road users at risk of injury but crash for cash has significant costs associated to it. We estimate it costs the industry £336m per year and it is premium-paying motorists who ultimately foot the bill.”

This successful verdict brings IFB to its landmark 500th conviction milestone since being set up back in 2006. The IFB leads the insurance industry’s fight against fraud, using sophisticated software to analyse and detect suspicious patterns of behaviours. It works closely with the police and other regulators to crackdown on fraud and protect honest premium-paying motorists by ensuring fraudsters are brought to justice.

Members of the public can play their role in fighting back against ‘crash for cash’ scams and other types of insurance fraud by reporting what they know to the Cheatline.

Powered by Crimestoppers, the Cheatline is a free service that enables the public to anonymously report information or suspicions about insurance fraud by calling 0800 422 0421 or reporting online at www.insurancefraudbureau.org/cheatline. All information provided to the Cheatline is treated in the strictest confidence.